Novak is the Orange Boy from the Basquelaine 'A' of Intention Hill litter, a co-breeding by Kelley Hoffman of Basquelaine and Tracy Wessel of Intention Hill. Novak lives in Montreal with Sandra Lafontaine, and is co-owned by Tracy Wessel. He is training in agility, frisbee, obedience and herding. He also regularly bikejors with Sandra. While frisbee was not the primary intention for Novak (also called Anu), he has already earned his Disk Dog achievment (DD) in August 2012, after earning his Retrieval Proficiency Test (RPT) in April. In June, he also participated in the filming of an episode of Animo, deomonstrating his frisbee skills for the show. Animo is a weekly television series focusing on pets, with episodes about medical, training and public interest topics.

Novak was a dominant male in the puppy pack, second only to his brother Vallon (Blue Boy). He was not one of the big puppies, but he packed a serious attitude. He was first to leap off the top of the stairs into the yard, and showed an early intensity for toys, particularly balls. He is also strong with bite drive. In his early tests on sheep, Novak showed a lovely natural balance, independent of the handler. In his early scent tests, he showed a natural tendency for air scent, and strong work ethic. 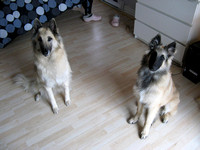 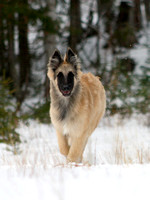 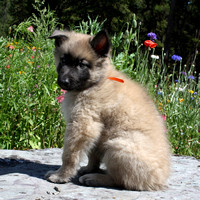